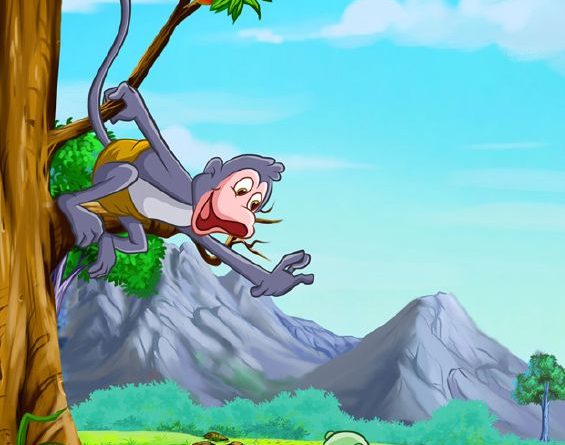 About Panchatantra Stories For Kids:

The Panchatantra is a combination of five words. The earliest recorded work, attributed to Vishnu Sharma. Let us see the five principles that are highlighted in Panchatantra stories.

– About how lost friends are gained back or made new friends.
– Understanding about how good friends are lost.
– About how consequences of taking action without knowing the truth.
– About how gains can be lost if proper care is not taken.
– About war and peace.

To make story time fun-filled for your kids, tell him these Panchatantra tales which great values and morals.

Once upon a time, there lived a monkey on the berry tree which is near to a bank of the river in the forest. In the river, one crocodile was living with his wife. One day crocodile came out of the water to sleep under the tree. Monkey offered the berries to that crocodile, as he loved them. Kindhearted monkey offered the berries to crocodile’s wife too. She also liked the berries, but at the same time, she was jealous of their friendship. So, she asked her husband to get the heart of the monkey. He did not want to do it but had no choice.

Crocodile invited the monkey to his home. Monkey also agreed, and as the monkey did not know how to swim, the crocodile took him on his back. Crocodile while talking, he blurted out the real reason for taking the monkey to their home. The lever monkey said that it left his heart on the tree. The crocodile believed and took the money back to the river and thus monkey escaped.

Moral of the Story: Choose your friends wisely and always have the presence of mind.

Once upon a time, there lived a stork. He used to pick fishes to eat. But as he became older, could not pick the fishes. He thought of a plan and called all the fishes and crabs. He said that some men are planning to fill the pond with crops. All fishes and crabs got scared and asked for help. Then the stork said, “ I will take you to a new big river. But as I am old, I can take a few at a time”. All agreed. Stork started taking the fishes whenever he was hungry.

One day crab asked to take her to the big river. Stork agreed. On the way, crab asked where is the big river, and stork laughed and pointed to a rock which is full of fish bones. The crab realized that the stork would kill her, so quickly she thought of a plan and caught the stork’s neck and did not leave until the stork died.

Moral of the Story: Act quickly when in danger and always have the presence of mind.

Once upon a time, in a village, post an earthquake, which is abandoned by its people after it shattered. The mice from the same village decided to stay back there only. On the outskirts, there was a pond. Many elephants daily come to that pond to drink water. But the village was on the way to that pond. While walking elephants trampled the mice. So, the king of mice requested the elephants to change the route, and will definitely return the favour. Elephants laughed at the mice what favour they can do, but they promised that they will change the route.

After a few days, elephants got trapped in a net, set up by hunters. One elephant luckily was not got trapped and informed the same to the king of mice. All mice went to that place and started nibbling the nets and freed all the elephants. The king of elephants thanked the mice.

Moral of the Story: A friend in need is a friend indeed.

Once a loyal mongoose was left to guard a sleeping infant by his master. After some time, mongoose saw that a poisonous snake was coming to bite the baby. He immediately attacks the snake and kills. When his master’s wife cam, she saw blood on the mongoose’s mouth and assumed that it had bitten her baby. She kills the mongoose. But after seeing the dead snake, she realised her mistake.

Moral of the Story: Think before you act.

Moral of the Story: Never trust a stranger.

Here is another interesting story from the Panchatantra stories. There once was a huge flock of pigeons that lived in a woodland. A sage old bird was present among them. This pigeon was revered by all the other pigeons. Every day the pigeons would return to their nest in the woodland to relax after seeking for food and water.

The pigeon once noticed a lot of rice grains spread out on the ground. They made the decision to fly down and consume the grains when they were happy. The old pigeon, however, grew wary and quipped that it might be a trap set by the birdcatcher. The birds ignored his requests for them not to descend.

The pigeons descended, landed on the net, and immediately began to devour the rice grains. They then discovered that they were immobile and enclosed in the hunter’s net. They were stuck. The hunter was delighted to see the pigeons captured. When they realized this, each pigeon began to drag the net in their own direction.

They were unable to extricate themselves, though. They sobbed and begged the Old Pigeon for assistance. “Fly up together and bring the net with you,” he suggested. The birds obeyed orders. They quickly began flying together while the net was still lodged in their feet. The unity of pigeons astounds the birdcatcher. The pigeons flew to a friend’s mouse-inhabited home. He started biting the net with his razor-sharp teeth right away. He completely cut the net, releasing the pigeons.

Unity is strength, the wise bird said with a chuckle. Your collective action of togetherness saved you all.

Moral of the Story: Union is strength.

An impoverished Brahmin named Swabhavakripna once resided in a village. Swabhavakripna had no friends or family and was completely alone. He had a reputation for being stingy and relied on begging to make ends meet. He kept any food he received as alms in an earthen jar that he hung next to his bed. He pulled food from the pot whenever he was hungry and consumed it.

The Brahmin received so much rice gruel one day that even after finishing it all, a pot’s worth remained. Brahmin was overjoyed to receive such a large amount of food. The Brahmin stayed in bed throughout the night, unable to keep his eyes off the pot. He quickly fell asleep. He started to imagine that there was too much rice gruel in the pot.

He had a dream that he could sell the land for 100 silver coins if there was a famine in the area. He would purchase a couple of goats with these silver coins. Every six months, they would produce children, and soon he would have a herd of goats. Then he would exchange the goats for cows and buffaloes. They would then have their offspring. They would mature and produce a lot of milk. He would sell the milk at the market and use the proceeds to create a lots of butter and curd. He would then put that butter and curd on the market shelf. He would become richer than he had ever been in this way.

He would purchase a huge home with four structures arranged in a rectangle with this cash. After learning of his fortune, a wealthy Brahmin would marry his daughter to him. The son will be born soon, and he would give him the name Soma Sharma. When Soma would play around and make noise all day, the Brahmin would reprimand him. However, Soma would not listen, prompting the Brahmin to pick up a stick and dash after him in a panic. Brahmin, who was deep in his dream, grabbed up the stick that was next to his bed. He began using the stick to strike the air. He struck the earthen pot with the stick as he was doing this, causing it to break and spill all of its contents over him. When the Brahmin awoke, he discovered that all had been a dream. All of his hopes were dashed at once.

Moral of the Story: One should not build castles in the air.